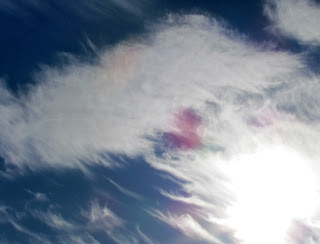 I have had a very difficult week.  My external hard drive literally crashed.  My computer is located under my desk, the drive was sitting on top.  My skirt caught it while it was running and it fell to the floor on it's side.  Though it works for a few minutes--it stops after that and will not run.  I am unable to access most of the pictures I've taken over the past year and then some.

We took it to the Geek Squad where I had bought the drive.  At first they said there was an 80 percent chance of the data being recovered.  Then they said 100 percent.  What a blow it was when they called to say it was beyond their capabilities.  To send it off to retrieve the data would cost $250-$1,000.  As I work for a non-profit, that would be an impossibility.

I was so bummed.  Though some of what I lost was backed up, much of it wasn't.  Items from our precious Grammie, Great Aunts and Uncle, sweet Nita and dear Gramma Gladys, which I'd scanned into the computer, along with family trips, family photos, artistic macros, cloud painting ideas--most of the photos I'd taken over the past year.

Of course, my sweet SissyBoo knew something was wrong and called to see if I was alright.  I told her what had happened.

"Get outside and start taking more pictures," she advised sympathetically.  She'd lost her pictures before, too.  She knew how devastated I was.

So yesterday morning, I trudged outside with my camera.

To my delight, the skies were filled with angels!  I was clicking away, when I sensed Someone wanted me to turn to look at the western sky.  I did.  And you see the photo above--God, Himself blew me a kiss.

I clicked the camera and lifted my face toward the heavens.  I am sure I felt His loving hug.

For more heart art, photography and altogether fabulous heart stuff from around the world, visit Clytie at Random Hearts for Guest Heart Thursday!

Posted by Beth Niquette at 4:39 PM

I have always loved watching the skies. Over the last few years I have observed the most interesting cloud formations. Nature is filled with wonderful forms. In the trees, ripples of water, rocks, cliffs--What one finds within Nature's medium is nothing short of amazing. Thanks to my digital camera, I have photographed some decidedly amazing pictures. I have created this blog to share them.

This is my favorite book reviewer. Rena Lanyon gives a well-written review from a youthful perspective.